Your Captain feels amiss by not keeping his readers abreast of the happenings of those backward 10th Century scumbag fanatics known in my circles as Islamofacist!

First, the Islamofacist have renewed their call for the assassination of British author, Salman Rushdie. This religious fatwa For Mr. Rushdie’s assassination was originally issued by that apostate of Hell, Ayatollah Khomeini in 1989. Mr. Rushdie spent over 10 years in hiding for his and his families safety.

Since the Queen of England recently bestowed a Knighthood on Mr. Rushdie, those stupid bastards want to “off” Sir Salman. In fact, Forouz Raja’ee-Far, secretary general of the Headquarters for Honoring the Martyrs of Islam World Movement, said the former $100,000 prize for carrying out the execution ordered by Imam Khomeini in 1989 has now been increased to $150,000, the Fars News Agency reported Monday.

The above death threat and the fact that Queen Elizabeth granted the knighthood should have the men and women of MI-6 burning the midnight oil at Whitehall! The assassination of The Queen or another Royal family member is certainly crossing some of the Islamic savages mind right about now! 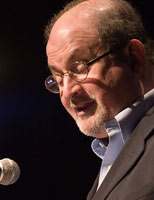 Also, within the last hour or so, Brian Ross and the ABC News investigative team has posted a story that they have received a copy of a videotape of a Taliban suicide bomber graduation tape and that these new recruits will be “trying to get their chance to score with 77 virgins at the feet of Allah” by blowing up innocent American and European civilians.

First off, this is a perfect argument for more people getting concealed carry licenses for handguns. That would certainly be better security for innocent civilians than anything the “multi-headed hydra”of Homeland Security could provide to the citizens of America. Hell, at least 1000 illegal immigrants of Mexican and other nationalities stream across the borders of Texas, New Mexico, Arizona and California every night with little problem. Hell, if this ABC news story isn’t a damn good reason to shut down the border now, I don’t know what is…WAKE UP YOU STUPID IDIOTS IN WASHINGTON, DC!

Furthermore, it is time to start pressuring moderate Arab governments to either start a reformation movement within Islam to turm away from the barbaric practices prescibed within the Koran, or suffer the consequences.

To illustrate those consequences, we should nuke Iran back to the Stone Age! They are the chief supplier now (and probably always have been) of the Islamofacist groups. This would also send a definite message to Beijing and Moscow that it is time to consider the strategic plans for confrontation with the West.

DISCLAIMER – The policy of this blog and your Captain is not to consider every Muslim as an Islamofacist. In fact, I know and have known several peace loving Muslims. However, I am a big believer that the Islamofacist and those symphatethic to their cause are a larger number than most people think, and their ranks are steadily growing while GWB fiddles away our country, just like Nero did for the Romans!